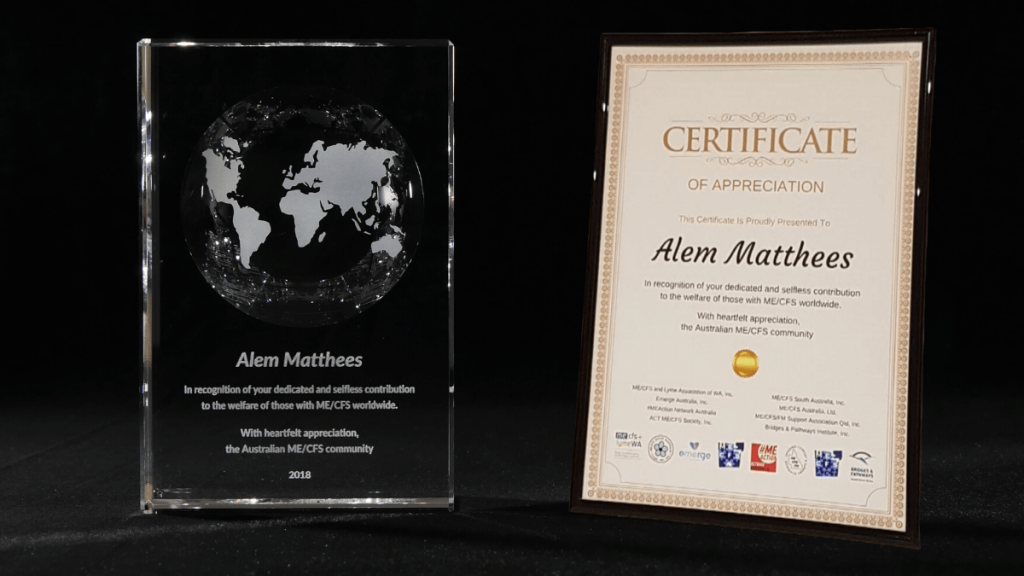 Last year on his birthday, we presented Alem Matthees with an award and framed certificate on behalf of the Australian ME/CFS community, and state and national ME/CFS organisations.

Alem was being honoured for his extraordinary contribution in fighting for information that allowed the PACE trial to be debunked.

The PACE study (published in The Lancet in 2011) is a highly controversial study in which the researchers concluded that cognitive behavioral therapy (CBT) and graded exercise therapy (GET) were effective treatments for chronic fatigue syndrome (CFS). These conclusions have since formed the basis of many ME/CFS treatment guidelines – directly resulting in harm to some patients.

Alem refused to accept the findings of this study, and was the first person to request the raw data from the study in a bid to reevaluate the data and their conclusions.

In March 2014, while quite unwell, Alem took his Freedom of Information request to Queen Mary University of London, initially in a polite letter. His request was refused, as were more than 30 other FOI requests from around the world. The university then spent a quarter of a million pounds (about $476,000 Australian dollars) fighting Alem’s more formal requests in the courts, which, in August 2016, eventually found in Alem’s favour.

Reanalysis of the methodology found numerous flaws, including that during the study, they had changed the thresholds for what counted as recovery. Some patients who were still sick were also counted as recovered. A reanalysis of the data released to Alem brought to light that the claimed recovery rate in the 2011 PACE paper was between 3 and 7 per cent, instead of 22 per cent, questioning the validity of recommendations of CBT and GET as treatments for ME/CFS.

The international ME/CFS community owes Alem a very great deal, as he put his own health on the line to try and protect the health of others.

The award, with a map of the world on a crystal globe, was chosen to represent the international significance of Alem’s work. 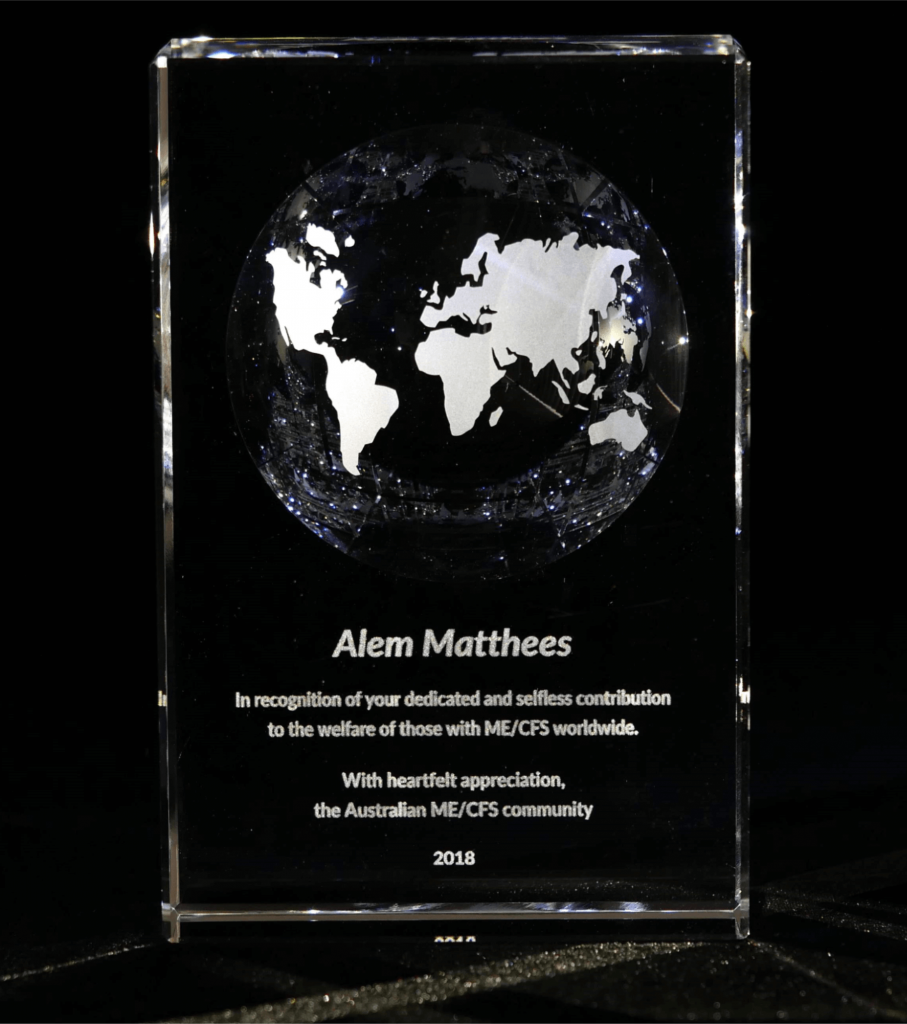 Alem’s award is engraved in white with the message:

In recognition of your dedicated and selfless contribution

to the welfare of those with ME/CFS world-wide. 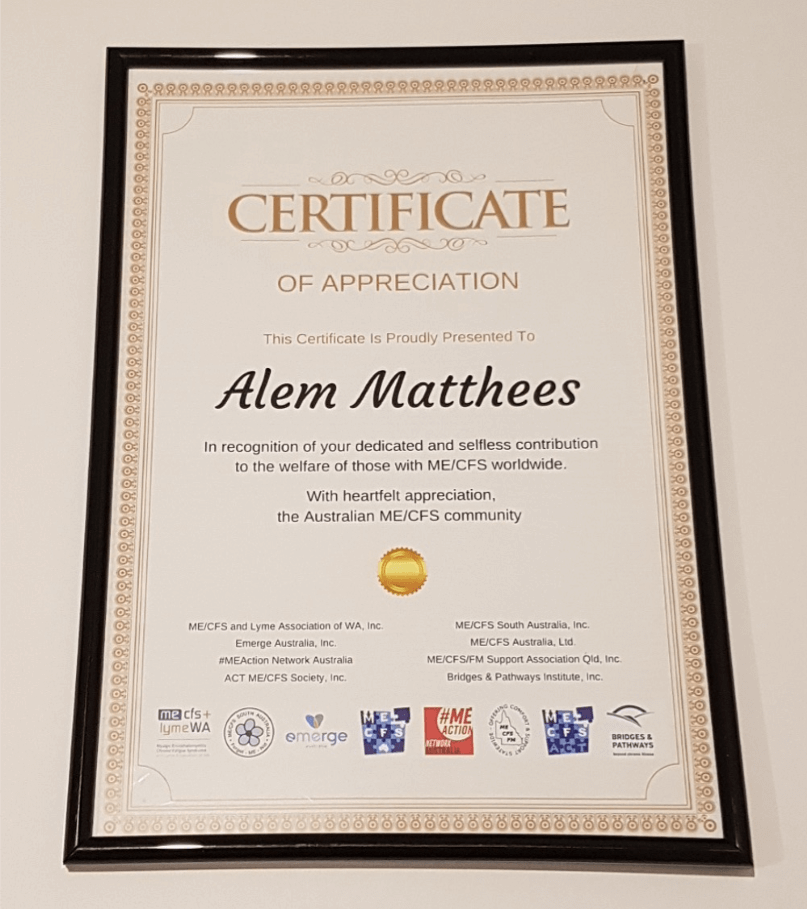 Alem’s mother, Helen, sent us the message below a few days after we delivered the award in May 2019.

“Both Alem and I really appreciate it. You’ve made Alem very happy, something he hasn’t felt for a long time.

I’ve hung Alem’s certificate on the wall in his room. One day he may be able to sit up and see it!

I’ve started reading birthday messages to him but only one at a time, he just can’t handle much.

I’ll put his beautiful crystal up when I’ve taken his birthday cards down.”

Who is Alem Matthees?

Alem is a person diagnosed with ME/CFS living in Western Australia. The severity of his illness has left him completely bedbound, needing to be cared for by his mother Helen and step-dad Jim.

The work involved in maintaining the PACE FOI court battle was gruelling, taking a huge toll on Alem’s health. He notes “Many factors were involved in my demise, not simply the PACE FOI request. But the excessive reading and writing involved no doubt contributed.”

Alem’s award displayed in his bedroom

Alem’s award is displayed in his bedroom where he has spent every second, of every day, of every week, of every month, of every year since February 2017.

“While Alem cannot see his award or certificate, it remains my hope that they both provide some light and happiness to Alem while he lays there in his bed. In perhaps a small way, a reminder that the Australian ME/CFS community is there with him by his side, supporting him with well wishes and support for his contribution to advocacy.”

Here is a photo, taken by Alem’s mother, of the certificate hanging on his bedroom wall, and the award displayed on his bedside table. 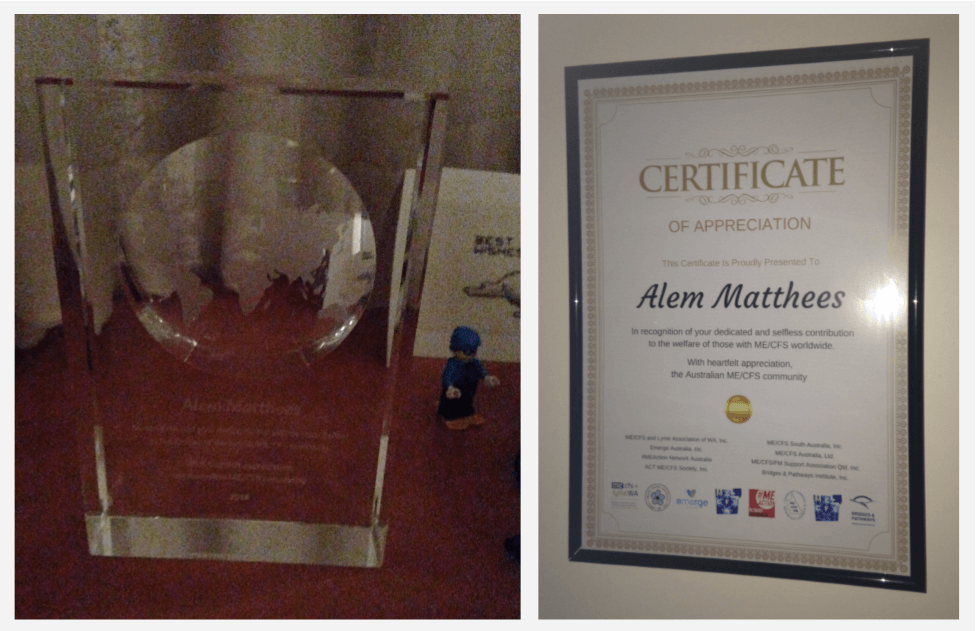 Organisations who contributed to Alem’s award

Toward the end of 2018 and start of 2019, state and national organisations from all around Australia collaborated with ME/CFS and Lyme Association of WA and contributed financially to the award.

This award is on behalf of the whole Australian ME/CFS community.

“It was a pleasure to be able to assist with this award for Alem. It was nice to get to be a part of choosing the award, designing and creating the certificate, and knowing that we are all doing something really special for Alem. Another positive is that each organisation replied really quickly saying they would love to be part of this. It was great to know that there is so much support from all across Australia. There were others in our community with ME/CFS who also helped out with aspects of it, including the idea for an award and deciding on the award wording, and we thank them all for that community effort.”

One of our volunteers in WA has become good friends with Alem and Helen. There had been discussion of presenting the award to Helen at a public ceremony at the WA #MillionsMissing event in May 2019. However, it was agreed with Helen that the award was a personal thank you to Alem from the Australian ME/CFS community and that it should therefore be presented privately without a big show.

The 12-month delay in making the award announcement public is due to the poor health of volunteers in the time since. We decided to wait until the 12-month anniversary of the award, and be able to give an update on Alem in that year since.

Many thanks to WA volunteer Stephen Le Page, who spent a very long night taking promotional photos of the award. It turns out that it is not easy to take photos of a crystal award, with every tiny speck of dust showing up and being difficult to wipe away, making sure the laser engraving can be seen, and avoiding distracting reflections. As an unstaffed and unfunded organisation, we rely on the hours contributed by our unwell volunteers to bring things like this together. We couldn’t do it without them.

Special mention to Alex Bradley from Western Australia who initiated the award idea. Thank you Alex for thinking of others and getting this rolling!

Making a difference can start from one action

Alem’s efforts are a beacon of light for our community. They show that one person’s action can make an impact on an entire international community. Alem saw an issue that needed to be tackled, got to work researching and writing, and persisted until he succeeded. Soon, several researchers, academics and ME/CFS advocates were working with the released data to reanalyse the study. Public health academic and investigative journalist, David Tuller, also took up the gauntlet and started publishing critiques on the PACE trial.

About The Pace Trial

David Tuller writes about ME/CFS at Vincent Racaniello’s Virology Blog, which is a great place to read about The PACE Trial.

You can also watch David Tuller’s presentation of ‘The PACE Trial on Trial’ hosted by ME/CFS and Lyme Association of WA on Sunday April 15th, 2018.